I've reached a certain age that I can make well informed decisions concerning large purchases or dealing with health issues. That's why I use Spokesowls to filter out the riffraff in matters of my corporation loyalty. Everyone knows that corporations are perfectly trustworthy but having a spokesowl just gives them an extra sense of all knowing presence and wizened security. Just take the Spokesowl for America's Best Contacts & Eyeglasses. 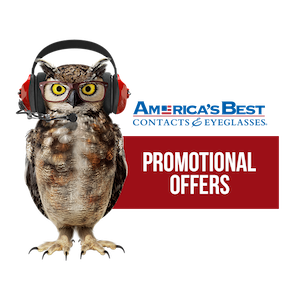 I MEAN IT SAYS SO IN THE TITLE - AMERICA'S BEST!

If it's good enough for the Spokesowl, who is obviously in need of an optician, then it's good enough for me. Especially after he compliments, in one of their commercials, a girl exiting a store with her new glasses feeling sassy like she's on a runway then she stumbles or that time when the spokesowl, who suspiciously sounds like Norm McDonald, is trying to tell the person that they paid too much money for their eyewear and the person responds by saying, "Who, Who". 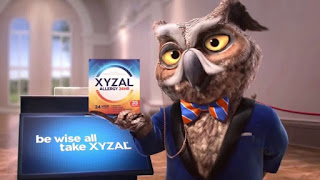 So, when I'm feeling under the weather from allergy suffrage I turn to the products with the most side-effects, the ones with a list as long as your arm just stopping short of death as a symptom. Once again the spokesowl makes my decision for me. When I need an antihistamine, I choose XYZAL! 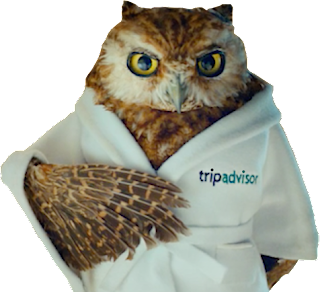 Sometimes I need to book a cheap motel in the dive parts of Panama City, the kind from the 50"s with a circular motor court and construction workers sitting outside smoking, grilling and man spreading. I rely on the Trip Advisor owl, who sounds like he knows his way around a sleazy motel. 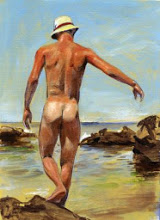